UA-154186104-2
Building a Successful Landscape or Fine Art Photography Business | Part One
A case study of successful pro photographer Thomas Mangelsen and how he grew from an amateur to pro and built his business into a multi-gallery empire and the business strategies he follows.
photography business, Thomas Mangelsen, Images of Nature Gallery, successful photographers, amateur photographer. photography studio, photography gallery, Jackson Hole Images
1812
post-template-default,single,single-post,postid-1812,single-format-standard,theme-borderland,eltd-core-1.1.3,woocommerce-no-js,borderland-theme-ver-2.2,ajax_fade,page_not_loaded,smooth_scroll, vertical_menu_with_scroll,columns-3,type1,wpb-js-composer js-comp-ver-6.0.5,vc_responsive
in Amateur to Pro
by gajones31
0 Comments
0

One of the things you’ll find about successful pro photographers is that they are most often self-taught in their craft.  They started as amateurs and proceeded to learn the craft through a combination of written and online tutorials which they added to trial-and-error experience.   Whether you are working in a full-time or part-time job as they did before going pro – I hope you will find some real guidance in knowing more about their rise to the next level.

There are three pro photographers whose careers guide my own thinking in what it means to be a successful professional photographer. Art Wolfe, Thomas Mangelsen and Steven Oachs each found their own path to becoming pro photographers and make an excellent living from their photography endeavors. Each has superb photography and post-processing skills, but equal to those has been their ability to craft successful on-going businesses.

In this series, I’m going to walk you through the business strategies of these pro photographers to help you see how they got to where they are today.  While each works mainly in the landscape/fine art area of photography, each came into photography in different ways and created their own unique path in building their brand and how they deliver their photography.  Creating a successful photography career means much more than the ability to craft interesting images in the hopes people will find you and buy them.  It means building a foundation based upon marketing, administrative processes, networking, diversification and using social media platforms to deliver your work across a wide number of outlets.  Something each of these photographers has done in their own unique way and by knowing more about how they have done it I believe will help you visualize your own options for doing the same.  In Part One, I’m going to start with Thomas Mangelsen of Jackson Hole, Wyoming. In 1970 Mangelsen moved to Nederland, Colorado where he spent two years living in the Rocky Mountains in an old mining shack without electricity or running water with his English setter, black lab and a raccoon. Tom continued to work on his photography and studied arctic alpine ecology at the University of Colorado’s Mountain Research Station near Nederland. There he met Bert Kempers, a CU film producer, who later hired Tom as cinematographer and film editor for his company Westwind Productions, making educational and nature documentaries. Tom longed to make a documentary about the Platte River and its great wildlife resource and with what he learned from working with Westwind Productions, he utilized his skills and returned to the Platte each spring to film the great crane migration. These experiences led to Tom traveling to the cranes’ nesting grounds in Alaska and their wintering areas in Texas. National Geographic television wanted to produce a documentary, which would chronicle the plight of the endangered whooping crane and the efforts to bring them back from the brink of extinction. After learning that Tom had been photographing sandhill and whooping cranes for more than ten years, they hired him as cinematographer and associate producer for the television special Flight of the Whooping Crane, which was nominated for an Emmy award. Mangelsen also photographed and produced the PBS NATURE and BBC Natural World film, Cranes of the Grey Wind, a documentary on the life cycle of the sandhill crane.

When he first started he had a small body of work that he shopped around to various galleries in Boston, New York and San Francisco.  While none were really interested in wildlife images, one gallery took a few prints on consignment – yet they were relegated to the back walls.  In addition to trying gallery sales, he also did a few art fairs and craft fairs, but soon decided it was a painful way to make a go of it.

In the early 1970s, Tom and his brother David began selling limited edition prints of his images by setting up examples of his images at a kiosk in the Omaha Airport with a brochure and an 800 number one could call and have the selected print shipped to them either as a print or a framed print.  With some success in the Omaha location they opened a second one in the Denver International Airport that successfully brought in money. At that point with a lot of their time being spent framing his work in their Dad’s garage came the need for more space and his Dad indicated the noise in the garage throughout the night was keeping the rest of the family awake.

With the income from their kiosks in the first year running $30,000 and the second year running $90,000 in sales, they decided to open more kiosks in all of the airports they could get into that met their criteria. They quickly expanded to Chicago, Phoenix, Atlanta, Minneapolis and Denver – although problems led to pulling out of all except Denver.  In Chicago, the images would get stolen out of the frames and in other areas the traffic count did not provide the visibility needed for their location in the airport.  Even so, the results from sales in Denver told him there was a market for his work.  Thus, he opened a small 300 square foot gallery in the upstairs section of a building in downtown Jackson Hole. They started off doing about $15,000 in the first year.  Next, they found a place on the first floor in Park City, Utah and used their funds to open a gallery with visibility and foot traffic for the winter.  The gallery did really well and that’s when they realized there was a great market for his type of photography in a prime market.  With the incredible market and staying open late on Main Street the gallery was doing well.  The biggest takeaway from the success of the Main Street gallery in Park City was the validation of an anchor gallery concept.

Right after that he moved out of the upstairs gallery in Jackson. Rent was $200 a month there, and when they started they had calculated that they would have to do $10,000 a year to pay for all of their costs. When they got to year three, Tom’s brother Dan said that they had maxed out that gallery at $60,000 and thought he could do better.

About three years after they had moved out of that gallery they were doing $110,000. Regardless, it was a decent start. Tom says “I had no idea I would make a living with photography, nor did I think a small upstairs gallery off the beaten path could earn $60,000 a year.”

Tom figured if they could have that type of performance on 200 square feet, upstairs, then they could succeed in a bigger gallery in Jackson as well. A gallery space opened up on Main Street and it had 4,000 square feet of space.  “We felt we could do $400,000 to $600,000 in a major gallery if we were doing $100,000 in our small gallery. That was our rationale. It seemed logical. There were no real blueprints, and I could not go to anyone else and ask their advice because no other photographers had their own galleries” Tom says. 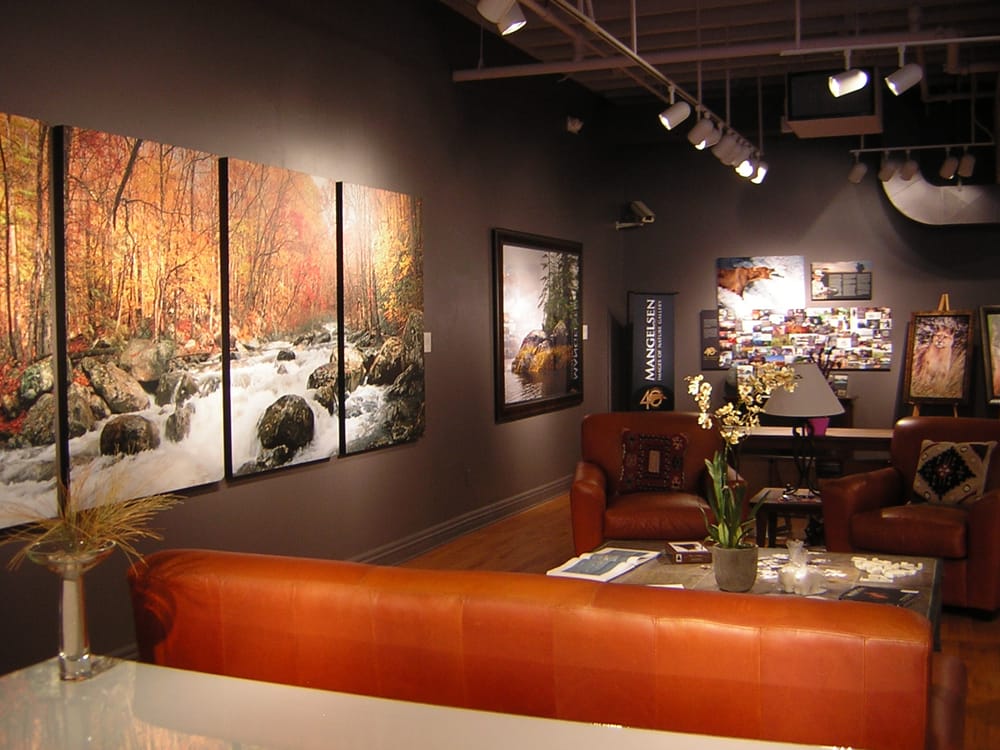 Since then he has opened a number of his own galleries across the United States in La Jolla, Galena, Park City, Denver, Omaha, Jackson Hole and Steamboat Springs.  In addition to his owner-owned galleries, he had a couple who enjoyed his images and worked out an arrangement to sell his work through three galleries which they opened in Palo Alto, Los Gatos and Laguna Beach in California.  They ran those galleries for 10 years before retiring to Lake Tahoe.

Today, Tom states his galleries “carry posters, lithographs, note cards, calendars and his four coffee table books and 6 desktop books. He has also done 15 children’s books where somebody else has done the text and he has illustrated them with images.

His main income by far is from the sale of limited edition prints which is the core of his business. At one time they strayed into music CDs and candles, but found whenever they strayed from the core part of the business, it was a waste of people’s time. “They do not come for music or candles. We have now retracted because they have nothing to do with my images. I was becoming too much of a retail store, and I need to keep it an art gallery” he said.

In addition to the 8 “bricks and mortar” galleries he runs, Mangelsen also maintains a stock photo agency of his work for sales to print and digital media providers, serves as an instructor in a limited number of workshops each year, speaks at a number of engagements about his work and is a featured artist at CreativeLive. Each of his stores have trained art consultants who can educate you about a print and point you to other Mangelsen works. By design, he has created multiple income streams built around his photography which help balance his income flow by not having to rely solely upon one area to carry him.  As lessons go, you can see he has built his success around limited-edition prints and controlling his costs by vertically-integrating his printing, framing and selling activities in-house to give him the largest margins possible from his work.

If you desire to have your own gallery space, study Mangelsen’s work and the business strategies he follows for creating successful brick-and-mortar galleries. Visit one of his galleries to experience the atmosphere.  Don’t neglect the business side and setup your recordkeeping, sales processes, marketing and branding activities so you can create work and sell it in a way that makes your buyers want to do more with you.

Create multiple streams of income by making your images available for a variety of uses.  Make yourself available as well.

Vertically integrate where you can to speed production times and keep costs low by keeping them in-house.  Outsource when the time-savings make sense and which allow you to do more productive activities.

Think about your sales process before you begin selling.  Create an information-sharing and low-pressure process for buyers.

Experiment with ways to get your photography in front of as many people’s eyes as possible.