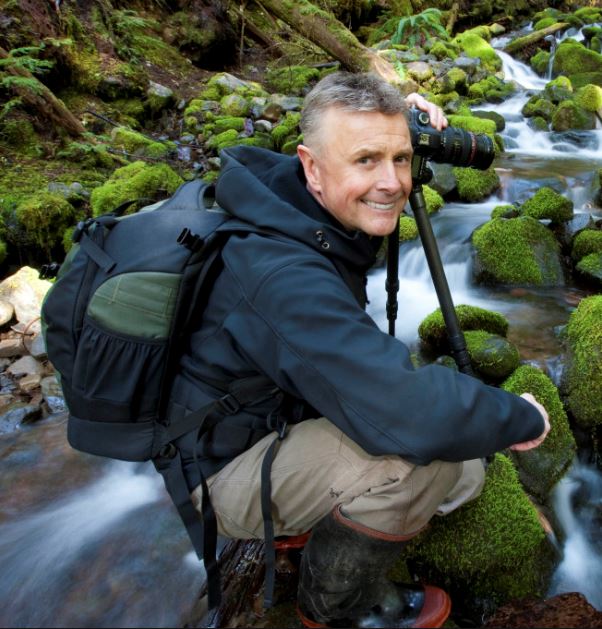 Art Wolfe was born in Seattle, Washington in 1951 and still calls the city home.  He graduated from the University of Washington with Bachelor’s degrees in the fine arts and art education and is a multi-faceted photographer/artist.  Wolfe often states that one of the primary reasons for his success is related to his understanding of composing a painting and applies this to his work – whether it is a landscape, wildlife or a fine art image.  He has had over 60 books of his work published and is featured in the PBS series “Travels to the Edge with Art Wolfe”.  The public television series explores environmental themes that have visual interest and follows Wolfe as he photographs the landscapes and people in the areas they visit.

Wolfe first began taking photographs as a means to document the climbing weekends he was spending in the mountains around the state of Washington.  With the images he brought back from his trips he began entering regional art fairs and competitions.  He approached outdoor gear stores like REI, Eddie Bauer and the North Face about carrying and selling his images in their stores.  REI let him have some space on their walls around racks of outdoor wear and the number of images grew to more walls around the stores over time.  In time, he got to a point of having a small gallery space within the REI store!  Being in a location where people who enjoyed the outdoors were buying his work, his confidence began rising that he could sell his work which built his self-confidence and in turn led to getting his work into retail stores around Seattle.

Still, photography was a learning process and as he retells it, many of the images from his first trips were unusable by his current standards. As an example, he recalled finding all of the slides from a trip using his first 35mm film camera came back completely clear – he had overexposed all of them.  He could stack all of the images on top of one another and see clear through to the other end.  The exact opposite occurred on his next set of slides – completely black from one end to the other from being underexposed.  With these experiences he learned through trial and error that the numbers on the lens and the shutter all worked to bring about a properly exposed image and he began learning how they worked together to do this.  Over time he learned how to use his camera to capture the image he had previsualized in his mind.

Once he understood the mechanics of taking a picture, he began expanding the types of images he was making. From the wildlife and landscape images he had originally started out selling to composed images of people painted in graphic designs and theme-based images, he began composing images with a target audience in mind.  In his words, “pre-visualizing an image is one aspect to my photography. You have an idea of a shot, and you make the shot happen. I also embrace and love the concept creation that I marry to my days of being a painter. I clearly look at those as two different genres of photography. With one I feel like I am wearing the shoes of an artist and the other one a journalist.”

Wolfe has published a number of his own books, along with being published by major book publishers.  As his income rose over time from the sales of his images, licensing of his images, book sales and his television show he opened his own gallery featuring his work and to serve as a base for his business. According to Wolfe “I am pragmatic first and foremost and I run a business with seven individuals.”  While books create visibility for your work, they don’t provide the best return financially but they are a part of one’s whole business plan.

One of the great lessons that can be taken from studying Art Wolfe’s work is that his photography meets multiple needs.  He shoots with an end-use in mind.  While he shoots fine art – he does so in landscapes wildlife and conceptual imagery.  Wolfe’s outside-the-box thinking about what to shoot has brought attention to his work and a level of visibility that few photographers achieve.  Visit Art Wolfe’s web site to see the variety of his work and the ways he makes his images available.