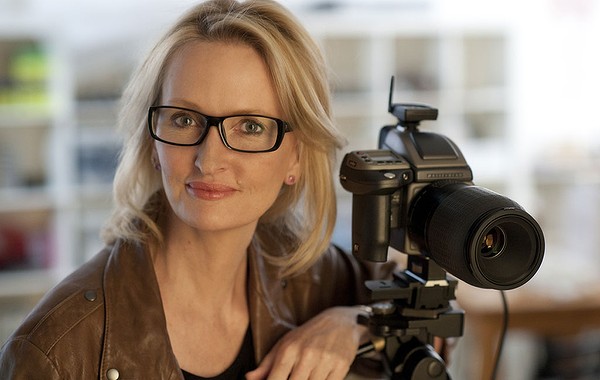 in Amateur to Pro
by gajones31
0 Comments
0

Anne Geddes was born September 13, 1956 in Australia and is a photographer, clothing designer and businesswoman who now lives in New Zealand with her husband and is best known for her stylized images of babies and motherhood. Typical images show babies or young children dressed as fairies and fairytale creatures, flowers, or small animals.  According to Amazon she has sold more than 18 million books and 13 million calendars of her work.

Anne dropped out of school at 17 and left home. Thereafter she married her husband Kel, and moved to Hong Kong in 1983, for his work in television. There at age 25, she began teaching herself photography using her husband’s 35 mm camera. Inspired by the images in Life magazine when she was young, she wanted to learn how to make pictures like those she saw.   By the time the couple returned to Sydney two years later, she had built a small portfolio.

After she moved to Melbourne due to her husband’s work, she assisted a local photographer before starting on her own studio from her garage.

She had always had an interest in photography in general, but the schools she attended did not offer photography classes. “I learned by my mistakes” she states.  Starting out, she did portrait photography beginning with one or two sessions a week for 10 years growing to an average of 2 sittings a day.  Over time she chose babies as her subject because of her love of them. “I had seen the way children and babies were generally being photographed. It just didn’t seem realistic to me that people took their children along to photographic studios all dressed in their Sunday best, photographs that didn’t really show the personality of the child.”  She decided to shoot the kind of images that her imagination found interesting and in the process people found her work interesting.  Criticism came from other photographers who did portraiture work because her concept of baby portraiture did not follow theirs. However, as she points out, if you are never being criticized then you are not pushing your creativity.  She recommends getting your work seen by entering competitions, joining local photo clubs who review images and get feedback.  Take in that feedback, but continue to pursue what your imagination sees as interesting.

Anne’s first studio was a space of around 450 square feet which required her to move everything out of it just to change the backdrop.  “Everyone has to start somewhere, humble beginnings are OK.”  The beginnings of her rise to the stratosphere of photographers came when she used a flower pot that she had at the studio and used it as a prop to put a baby in for a picture.  The idea turned out to spark her interest in what other baby and prop combos might be interesting which turned out to be a hit with her clients.

Using the concept of dressing babies into different costumes and photographing led to creating a book called “Down in the Garden” which ultimately led to over $15 million in sales of books and calendars.  While she continues to produce new images, books and calendars she also utilizes the proceeds from the sale of those products to support causes she is passionate about.

One of the most important things to recognize from Anne Geddes story, it to start from where you are with what you have.  Grow organically and build your business up. Rather than shoot images the way other photographers do – be creative with how you shoot your images.  Put your own stamp on your images by making images you find interesting – whether they meet the classic impression of a fine art image or not.

For instance, there are over 100 photographers shooting the sunset at Clingmon’s Dome in the Smoky Mountains every night of the week.  All of them shooting the sunset in a landscape mode to get the undulating lines of the mountain tops in the mist.  That means you have over 100 new images taken every night of the same subject in the same way!  Turn your camera to vertical and shoot it in portrait mode or even at a 45 degree angle – give people a new way to see your subject.  Be original – be you!